It’s been a month, a whole 30 days, since I took delivery of the new Surface Duo, unboxed it, and made it my daily driver. I wanted to give it some time, and let at least one software update drop, before I sat down to share my thoughts, so let’s do that today. 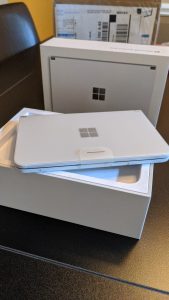 Some background: I’ve been an Android user since my HTC Hero in 2009, the first phone Sprint carried using the mobile OS. I’ve gone through HTC, Samsung, Sony and LG devices before becoming a huge fan of the Google Pixel devices, of which I’ve owned every one. My daily phone previous to the Surface Duo was the Pixel 4XL, and one of the main drivers for me to look outside the Pixel family is the noted lack of an XL model with the new release coming later this month.

For me, the Surface Duo was a new way to look at a mobile device, and maybe a chance to re-think how productivity that was usually managed on a laptop or tablet could translate to a device with a unique form factor.

The truth is that I think the Duo has way more hits than misses, but the misses are REALLY hard to live with on a day to day basis. Let’s walk through some of the high points first.

I feel like Microsoft wanted to make a device that didn’t get used like a traditional mobile phone, and in that they succeeded spectacularly. I don’t think of it like a phone, I don’t use it like a phone, and there are things I can do with it that I would never have thought of with a traditional phone. The app integration with the form factor is wonderful, and the flexibility to move between traditional Android apps and Microsoft productivity apps with no forced change of context is pretty amazing.

I miss my phone. I really miss my cameras. Both of them. One on each side. I miss having Android fit to the screen. I miss having a responsive UI. I miss having something fit for purpose. If Samsung didn’t bastardize Android so much I’d be interested in trying the Galaxy Fold to see how the form factor works with more traditional sized/shaped screens. I’m a fan of the possibilities and use cases, so I’m curious to see how it does in the market.

I’m keeping the Surface Duo. It’s got a few use cases that I really like, and they will work fine over wifi. I’m willing to let Microsoft take a couple more swings at the software and see if maybe some of the issues I ran into can be resolved. I’m a fan, and I’m glad I got it. Kudos to the Microsoft and Google teams who worked on this unique and one-of-a-kind device, I can’t wait to see how subsequent versions of the device progress. Please, please, please don’t skimp on the CPU and cameras next time, okay? Thanks.

However, the SIM card is going back in the Pixel 4XL, and even without a larger size device available, I’m going to pre-order a Pixel 5 and see how I like it. The Surface Duo is a whole new kind of device, but I can’t figure out how to use it as a replacement for my old one.

I’d love to hear your impressions of the device, or answer any questions you have. Reach out to me on Twitter @jdooley_clt.